In VFD drives, pulse width modulation (PWM) is used to vary motor speed. In this type of drive, a diode bridge rectifier provides the intermediate DC circuit voltage. In the intermediate DC circuit, the DC voltage is filtered in a LC low-pass filter. Output frequency and voltage is controlled electronically by controlling the width of the pulses of voltage to the motor. Essentially, these techniques require switching the inverter power devices (IGBTs) on and off many times in order to generate the proper RMS voltage levels and then reshaped it so that motor speed varies with the frequency of the pulses in the output voltage. This on off time control is called Pulse Width Modulation (PWM).  PWM AC drives allow wide speed ranges, programmable acceleration and deceleration ramps, and good energy efficiency. PWM techniques have varying levels of performance based on control algorithms.

VFD control mode choice greatly depends on application. Nearly all variable frequency drive manufacturers offer products for different application classes. A low power VFD may be classed as general purpose, so selection is straightforward. However, larger and more specialized drives will be offered for ‘industrial’ applications or ‘pump and fan’ applications. Sometimes these are referred to as constant torque and variable torque applications respectively. The industrial (constant torque) variable frequency drives are designed to ensure the drive has high overload capability, and high torque throughout the speed range. This suits applications such as many machines, conveyers, mixers, hoists etc. It may also include Vector and Torque control features 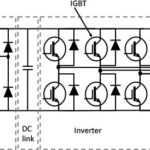 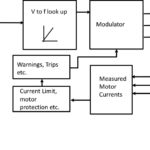 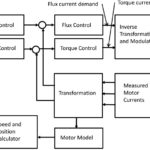 Volts/Hz control uses the ratio between voltage and frequency to develop the operating flux to supply operating torque to the motor. So if we want to control the speed of the motor, we need to vary the applied frequency. However, if we manage to vary the frequency, we need to look after the voltage as well, because the magnetizing current in the stator depends on the integral of the voltage over time. In order to keep the optimum flux in the motor, a non-vector drive will maintain a linear relationship between voltage and frequency; that is, as the frequency is reduced from the nominal value, the voltage is reduced in proportion. Minor variations on this, for example, by increasing the voltage at low frequencies to overcome losses, are common practice.

By maintaining a constant Volts/Hertz ratio, the drive can control the speed of the connected motor. Typically, a current limit block monitors motor current and alters the frequency command when the motor current exceeds a predetermined value. The volts/hertz block converts the current command to a volts/hertz ratio. It supplies a voltage magnitude command to the voltage control block. The angle of this tells the voltage where it should be with respect to current. This determines flux current to the motor. If this angle is incorrect, the motor can operate unstable. Since the angle is not controlled in a volts/hertz drive, low speeds and unsteady states may operate unsatisfactorily. An additional feature in new drives, a “slip compensation” block, has improved the speed control. It alters the frequency reference when the load changes to keep the actual motor speed close to the desired speed. While this type of control is very good for many applications, it is not well suited to applications that require higher dynamic performance, applications where the motor runs at very low speeds, or applications that require direct control of motor torque rather than motor frequency. Volts/Hertz control is a basic control method, providing a variable frequency drive for applications like fan and pump. It provides fair speed and starting torque, at a reasonable cost. It is common in today’s general-purpose drives to see Enhanced V/F control. An ‘Autotune’ procedure is required to obtain reliable, trip free operation and the best possible control and efficiency.

Vector control is complex. The setpoint demand from the user is converted into a speed and then a Torque demand, as well as a field then Flux demand that is part of the vector control system. To do all this, we need some pretty complicated mathematics, as well as accurate current measurement. We also need to know the characteristics of the motor we are controlling. We can do the math now with the powerful microprocessors that are available. We can also measure the output (i.e. motor) currents accurately with Hall Effect devices. These features used to make vector drives more expensive, but these days add little to the cost of a variable frequency drive.

In order to determine the characteristics of the motor we rely on the user programming the drive with the correct information. By setting the correct value of motor current, voltage and power factor into the appropriate parameters, the basic information is given to the drive. However, additional information can be obtained by running an ‘Autotune’, and most vector drives will ask the user to run this when vector control is selected. In a few seconds the drive measures additional factors such as primary inductance and stator resistance, which will help build an accurate model of the motor, making vector control much easier. Incidentally, the drive also takes considers the temperature of the motor during operation (calculated from the motor information and the load) as this affects many of the motor characteristics, so it is important to make carry out the autotune on a cold motor.

In the past, for good, reliable vector control, an encoder was recommended to give precise speed, and therefore rotor position, information. These days, with faster and improved mathematical modelling, an encoder is not so necessary. However, in some applications such as elevators and cranes it is still preferred. If no encoder is fitted, the drive will use the motor model instead to calculate the speed and position of the rotor.

The drive now controls the motor speed not by setting the output frequency directly (like a Volt/Hertz control), but by controlling the motor torque and flux. So now the setpoint from the operator or PLC is converted into a flux and torque requirement. In other words the drive says, “Based on the knowledge of the motor, how much torque and magnetic flux do we need to maintain the speed that’s been requested?” Because the drive is controlling the torque and flux directly, the performance of the drive is improved compared with conventional Volts/Hertz operation. The drive responds better to sudden loads, is generally more efficient, and can more easily control different types of motors such as the Permanent Magnet and Synchronous Reluctance motors. The speed regulation is much better, as slip is automatically accounted for.

The Vector Control system requires a lot of measurements and calculations. In the early days of vector control it proved hard to stabilize everything, and some drives proved difficult to set up and operate reliably, especially without encoders. Better understanding of motor models has made Vector control simple and reliable to use and offers the advantages of better speed holding, better response to sudden load changes as well as greatly improved torque at low speeds. Motors often run more efficiently – and therefore cooler.

Back to Overlooked Considerations